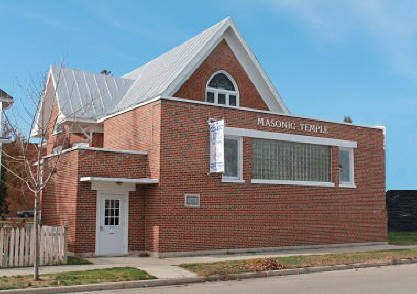 Many years ago the famous Dr Albert Schweitzer wrote: “It is not enough merely to exist…Every man (and woman) has to seek in his own way to make his own true worth.”

Those words capture the meaning of Freemasonry. As the world’s oldest and largest fraternity, our goal is to build a man’s most valuable possession; his character.

As members of the Masonic fraternity, Oconto Masons are oath-bound to build their own lives and character with the same care and precision stonemasons used to construct the cathedrals centuries ago.

Men of good character recognize the need to assist their fellow creature, thus, Freemasonry has an outstanding record for helping others. Along with scholarships to assist young people, Masons support many community-based charitable projects.

Prominent Freemasons like Ben Franklin and George Washington played essential roles in the American Revolution. And among the ranks of Freemasons are 9 signers of the Declaration of Independence and 13 signers of the Constitution.

Freemasonry—born in Britain, after all—had adherents on both sides of the conflict. Tabbert, of the George Washington Masonic Memorial, said Masonic groups allowed men on both sides of the revolution to come together as brothers—not to promote a political view, which would be against Masonic tradition.

Masonry is not a religion and is it has no unique theology and does not represent a path for believers to salvation or other divine rewards. Masonic refusal to rank one religion above the others hasn’t always been popular. Therefore, some religious leaders believe that Masonic rituals and beliefs may constitute an opposing faith.

Even so, to be accepted into Freemasonry, initiates must believe in a god—any god. Christians may be in the majority, but Jews, Muslims, and others are well represented in Masonic circles. At lodge meetings religious discussion is traditionally taboo as this is a gathering of men who wish to better themselves and society without separating differences of practice of faith.

Masonry has a long and rich history. They do not brag about their works, there is not always much known about Masonry. Although there are some secret signs and modes of recognitions, it often allows for many rumors and stories to be created about a secret society. If it was secret, there would not be large symbols on the building, websites, parade appearances, fundraisers or even Facebook pages about them.

If you are interested in knowing more about the Masonic Lodge of Oconto, you are welcome to contact us or consider visiting one of our public events.